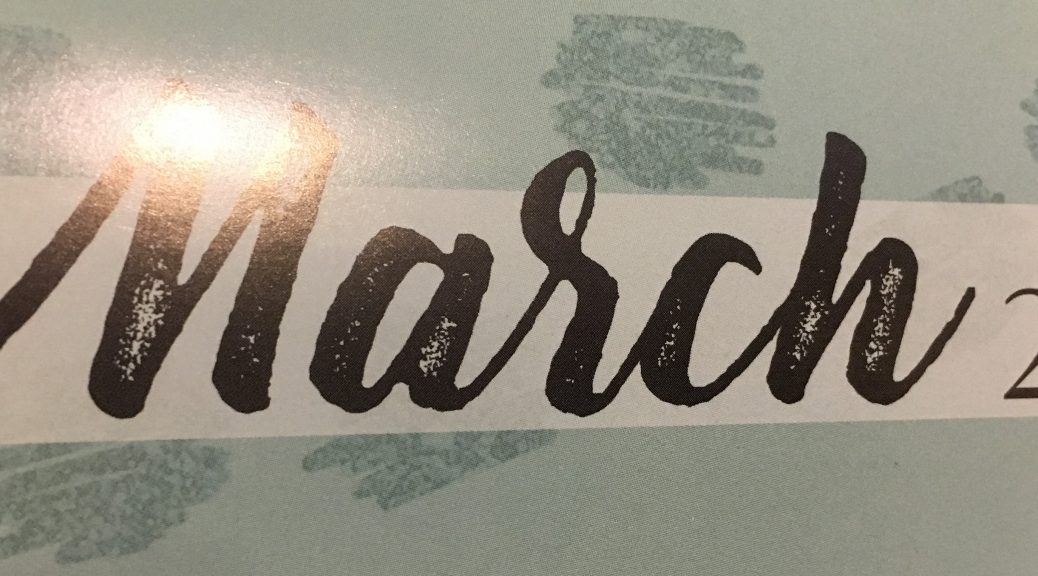 Well, it’s March now. I don’t know if that’s a good thing, a bad thing, or just a thing. I guess we’ll just have to see how it goes.

I will tell you this though. St. Patrick’s Day is in March and that’s a big green day. Green just so happens to be my favorite color. There’s a cute story in that regarding grass and a stop light that I might tell you someday. Long story short, I like March because it has green in it.

For the record, that’s the logic of a five-year-old.

On to this month!

I’m going to trim this one down a bit and just say to read one book. I know that I’ve got a lot of stuff to do this month and I really don’t want to overwhelm myself…despite the fact that I recently found a still good Barnes and Noble gift card. I shall be as disciplined as possible not to use it.

I want to read at least half of the alpha story, plus a few chapters of some other beta readings I’ve got. If I keep to a schedule on that, it should be a lot easier.

Write two chapters of fanfic. That means a new chapter of one fanfic and finish the chapter of another fanfic at the least. I would like to get more, but I won’t be picky.

I need to edit a short story, finish editing my novella, and continue editing another project.

I’m not going to have a specific writing goal except for the two chapters mentioned above. If I do get some other writing done that will be awesome, but not a specific goal

I am going to ink and color that picture. Now that it’s drawn, it really shouldn’t take too much time to finish. A few character sketches would be nice as well. At least a few faces so I can see them for sure in my head.

So, I have this project in my head that I really, really, really want to do. Based on how long it took a few others to pull off I know it will take me a few weeks to do. If all goes well, then it should actually be pretty cool!

Cleaning and organization will continue. Why is it so hard to figure out what to keep because of sentimental value and what to throw away and what to donate?

I will leave you with a piece of art that I finished a few months ago.